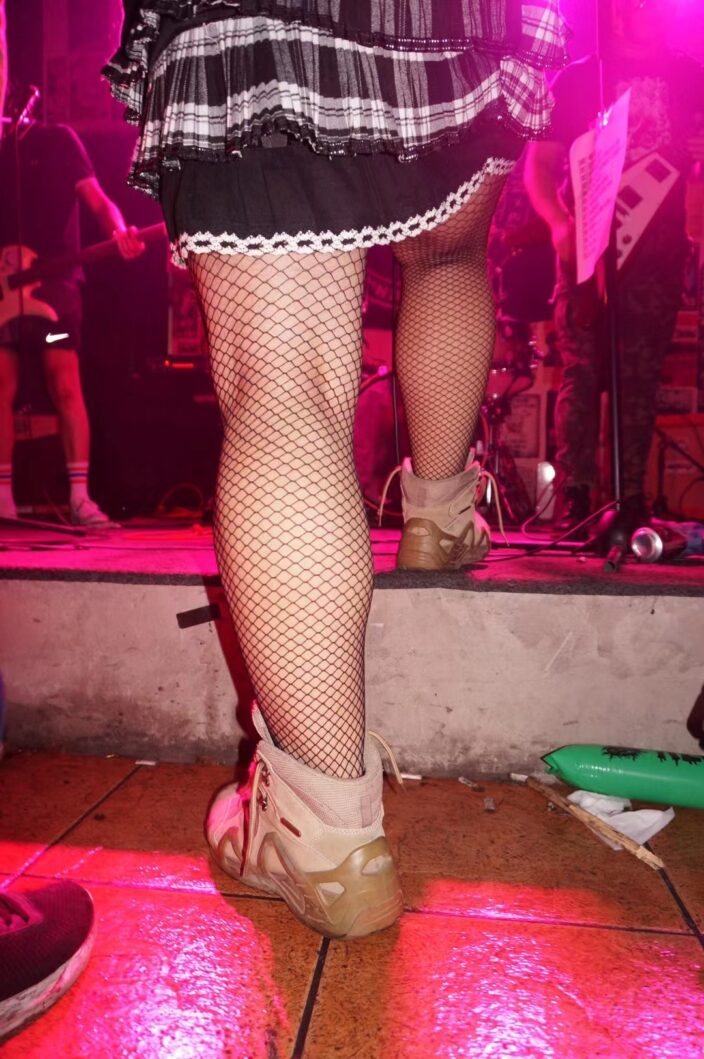 The Filthy Party concert series was created in conjunction with Rectal Wench’s new album, Judgment of Whore Labia From the Sewer Throne, (released in March through Splatter Zombie Records) with the aim to bring together the underground community within China who are fans of extreme music, and to celebrate, as the name implies, in an unhinged, filthy way. Since March, the events have taken place in Beijing, Tianjin, Qingdao and Chengdu. Along with Rectal Wench, other bands have joined the cause, playing alongside them like Want ASS, Globularcyst and Impure Injection.

If you think a crowd beating up on inflatable sex dolls is strange, there is a method to this madness, as it ties into the theme of Judgment of Whore Labia From the Sewer Throne. According to guitarist Laoshi Guo, the story goes – “Humanity is being held hostage in a sewer made of flesh (like a big rectum). The four members of the band put on their lucha (wrestling) masks and set out to save humanity from the inflatable dolls. It’s just like our live show, where we go crazy with the audience and defeat them to save humanity. We are heroes of the human race!”

The band knows that the style of goregrind they perform is not extremely popular in China. In countries like Germany (where their record label is located), the Czech Republic, Mexico, Italy, Colombia, or France, however, the scene for this type of noise is huge. “None of my favorite bands ever played a show in China,” says Guo. “You have to go abroad to see them. But we are the same people who play with the same things and are part of the same culture, even though they may not know we exist. Hopefully through these shows, they will begin to understand that China’s scene is just as strong as anywhere else.”

Not every show has gone smoothly, as the Beijing gig, previously slated to take place at School Bar, had to change venues at the last minute. Guo says that the police thought that the Filthy Party would include naked women and be an X-rated affair, based on the poster. While nudity is known to happen at shows due to overzealous fans, it isn’t encouraged. The Beijing show was moved to UFO Space and despite the last-minute change, the extreme underground community came together and made sure everyone knew via the band’s WeChat group.

The shows have gained the attention of the web-based music festival Sick Dog Fest, in which the band was recently featured on as one of their 80 bands showcasing grind, gore and death metal from around the world.

Extreme metal get-togethers do have a history in China, with similarly themed Gore Feasts taking place as early as 2013 – featuring Rectal Wench, along with the now defunct Cave Have Rod, Ready to Die, and The Dark Prison Massacre. The concerts have been recognized as being the birth of the extreme music community in China. Cave Have Rod famously made it to the Obscene Extreme Festival in the Czech Republic, which was a high-water mark for the underground music community in China. The Filthy Party series could be seen as miniature versions of this major grind festival – at the Obscene Extreme, the limits are basically turned off. People dressed in outlandish costumes (like men wearing ballerina outfits) routinely hit the stage as bands are playing and jump into the crowd via inflatable shark, dolphin, or nothing at all, hitting the dirt smiling.

Zibo’s Impure Injection have joined Rectal Wench on every Filthy Party show thus far. Front man Gore Geng weighs in on the connection between Obscene Extreme and the shows in China, “To play at the Obscene Extreme festival is a dream for every grindcore band on earth,” he says. “I have never been there, but I’m very familiar with it and hope one day I can play there on stage. There are always some issues with visas though, so for now we are making these local shows the best they can possibly be, and for any grind fan in China who has wanted to go to the Obscene Extreme, but can’t, we see it as an acceptable substitute.”

If not Obscene Extreme, Rectal Wench’s Guo hopes the band can still make their mark any place which will take them. “After China, we hope to tour the world and meet all of our filthy friends abroad.”

Until that day, though, the Filthy Parties in China will continue, with the next taking place in Shenyang.