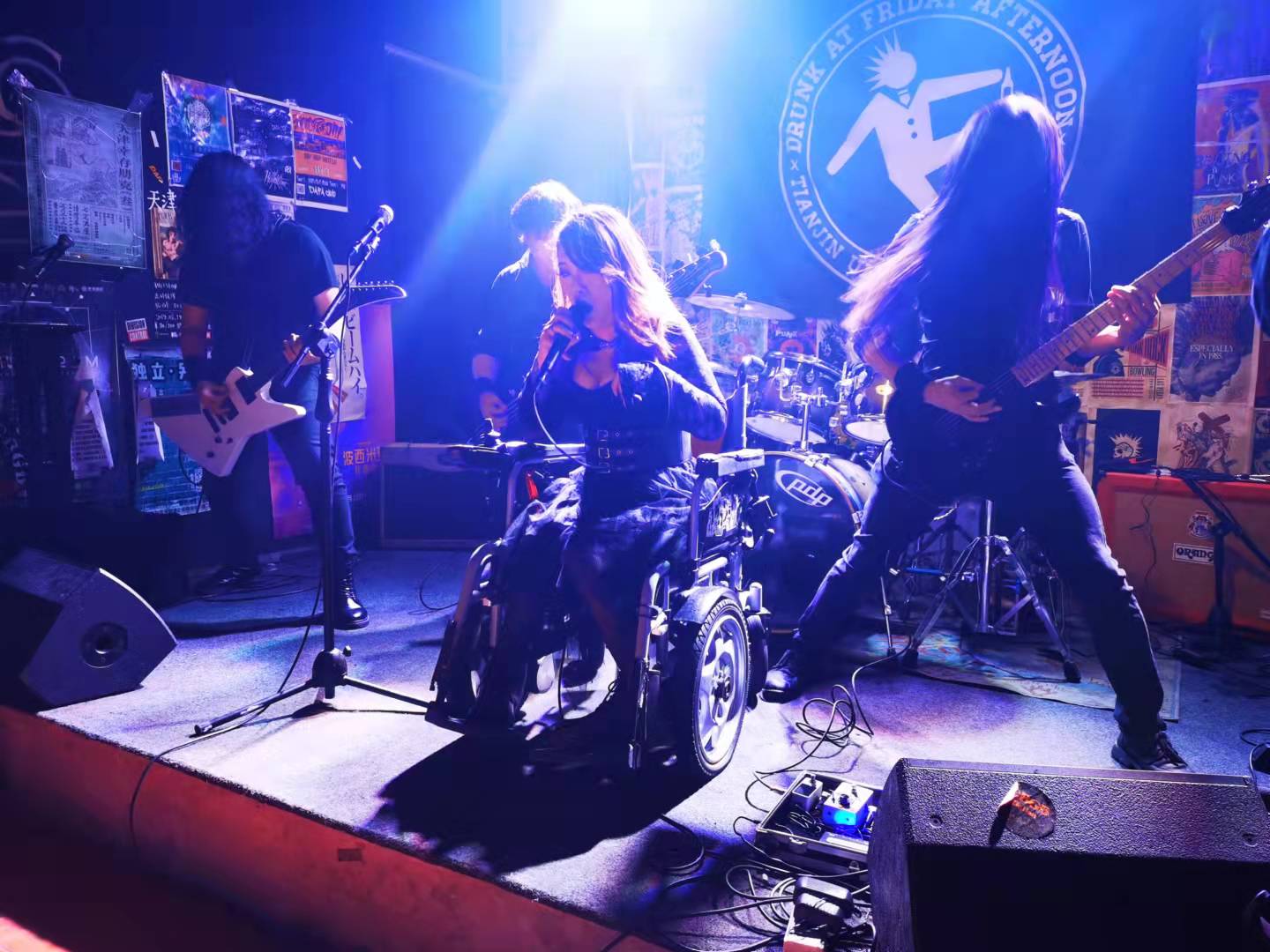 Summer is over. The air has gotten chillier and the rain has continued to pour down over the cities in the northern region of China for the past few weeks. Out of this rain, a few one-winged angels have flown down and dried their wings in the resident punk club DAFA. Angels with jet-black guitars, with Kill Em’ All stickers plastered on them, long hair, gothic robes, fishnet tights, big buckled up boots and a lone wheelchair.

One Winged Angel, Single Winged Angel or Angel Monoplane (take your pick), have been one of Tianjin’s long running gothic/symphonic metal bands, forming back in 2008. Known for virtuous music accompanied by operatic female vocals, the band fills a space in the city’s musical scene which brings the fishnet-clad, black lipstick wearing audiences who prefer a little more dramatic ambiance in their heaping of metal.

For this performance, they chose to give their fans a treat and play free-of-cost. It would be a special two set show, with one being their standard “plugged in” set, and the next being a special “unplugged” showcase along with acoustic guitars and special new or rarely played songs.

The first set was a righteous display of top-tier shredding accompanied by Angel Monoplane’s distinct goth vocals by Xiaosi which sometimes sound like they have come from a Cradle of Filth B-side on their earlier albums. Songs from their 2014 self-titled album were played like “Funeral of Soul” and “Nightmare.” While the band has keyboard parts, they lack a player at this time, so these were programmed into the PA. At the end of the first set, the band jammed two Metallica songs, “Fade to Black” and “Sad But True” with their guitar player taking the Hetfield vocal role for the latter.

As I said in the intro, the air is getting chilly, and many at DAFA were disappointed to find they didn’t have the heater set up in the club yet. During Angel Monoplane’s acoustic performance, you could imagine how toasty it could be with everyone huddled around a heater like it was a bonfire. For this portion of the show, different members took vocal duties and the crowd was more than happy to sing along with some of the well-known covers the band played.

The show was free if the fans shared the concert information on WeChat. It got me thinking about the band’s exposure on platforms outside of China: when searching for information about the band on English websites, there is next to none (besides my article on Metal Injection on bands with female vocalists in China) – no YouTube videos, no Facebook profile and no Bandcamp – so here’s hoping this review exposes the band more to Western audiences looking for another gothic/symphonic metal band to add to their playlist.