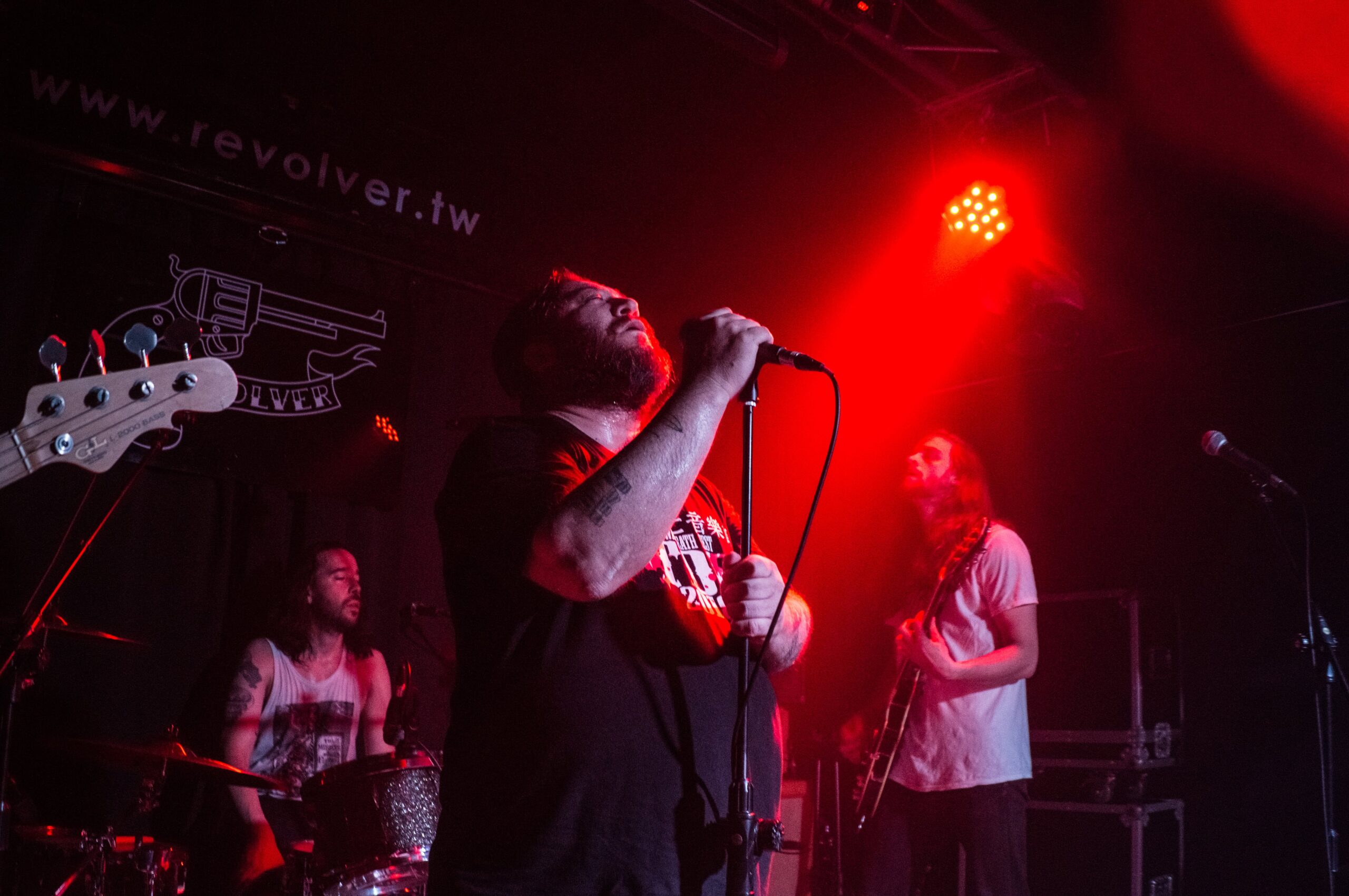 Alpaca is a group of a few doom heads who congregated in Shanghai to write slow, methodical, lurching songs which scream in anguish at some points and branch out into a psychedelic jam at others. Influenced by NOLA bands such as EYEHATEGOD, the band peddles the agony of life in songs such as “Pulled Apart by Horses,” “Drown” and “Slow and Painful Death.” I caught up with guitarist David to discuss the state of stoner, doom and sludge in the Middle Kingdom.

Could you comment on the stoner/heavy rock scene in China? Do you feel that there are different characteristics compared to bands in other countries – such as sound, lyrics, album art, philosophy ?

Like many “underground” cultural imports in China, things move quite slowly to gain traction without the high-levels of promotion that are often state-sponsored, so even in a country of 1.4bil people, you might only get pockets here and there of fans of heavy music in general. So, to witness the birth, growth, and rise of a sub-genre that is already quite underground even within heavy music in a country that I don’t call home, is pretty special. Festivals like Never Before’s Wild Dog Fest, or the festival we ran called “ShangHellFest”, or even the CNHC festival are so great because they can really shine a spotlight on bands and genres that aren’t necessarily “mainstream” or given adequate attention, but are slowly making waves in China. “Stoner/Sludge/Doom with Chinese Characteristics” is kind of hard to describe… Any band playing a show in China without an enormous amount of guanxi won’t be singing about the same things as bands from other countries, so I would say the lyrical content is probably the biggest difference, but even then, I feel like some content is left deliberately ambiguous… But maybe it’s unfair of me to comment on this stuff as a foreigner.

What is the history of Alpaca? How did you all come together in Shanghai?

It started pretty organically, just by our first drummer asking in a group chat if anyone wanted to start a stoner rock band. At the time, I was really hitting a Kyuss/early QOTSA phase, so I brought Chriest in on bass, who I knew from a previous Shanghai band called “State Fossils”, and then Javier was the last to come in on vocals, who had known our first drummer. As we started touring more and taking the band more seriously, we eventually landed on Alessandro, our current drummer, who I’d met at other shows in Shanghai.

As far as stoner/sludge/doom, how is the scene in Shanghai?

Shanghai is not typically known for rock, punk, or metal, it’s much more focused on EDM, hip-hop, or jazz. That being said, there are still plenty of talented heavy bands and musicians in the city. With regards to stoner/sludge/doom though, it feels SO weird so say, but I don’t know if there were any bands before Alpaca in Shanghai that played doom, sludge, stoner…any type of slow heavy metal… Which was really interesting when we first started because we would play a bill and, for better or for worse, we would stand out because we were the only band playing that genre.

Since living there, have you put any Chinese aesthetics into your music that you’ve noticed?

Because we aren’t from China, nor from any one country, we wanted the band to avoid any specific connection with China or any specific culture, mostly because it wasn’t really representative of us and that it wasn’t our culture to share/interpret, even as far as album/logo design. Our vocalist Javier has been known to add some lyrics in Spanish though, and in his and my side-project “HOCK”, I added a few lyrics about 扫黑除恶, but that would be the extent of Chinese influence in our music… Funny enough, when we played outside of China we were almost always billed as a Chinese band, so reactions were always pretty funny.

What do you have in store for us in the new album?

Our second LP has been in the works for quite some time. It will be the first time we don’t record everything in the same room, let alone the same country or continent! Like many people, COVID really threw a wrench into our gears, as we’d had a number of plans for recording the album together, but here we are. We’re definitely going to be taking our music in some new directions with the album, exploring different aspects of the genre and building some heavier tones. On Black Stars, we didn’t really take much time to write, organize, and record those eight songs, but with this one, we were much more careful with the song writing, transitions, intricacies, individual tones, so we’re really hoping that it ends up sounding as massive as it sounds in our heads! We’ve been recording parts in Shanghai, Montreal, and Madrid, so we’re handling all the recordings, but we’re also going to be collaborating with some bigger names for mixing/mastering.