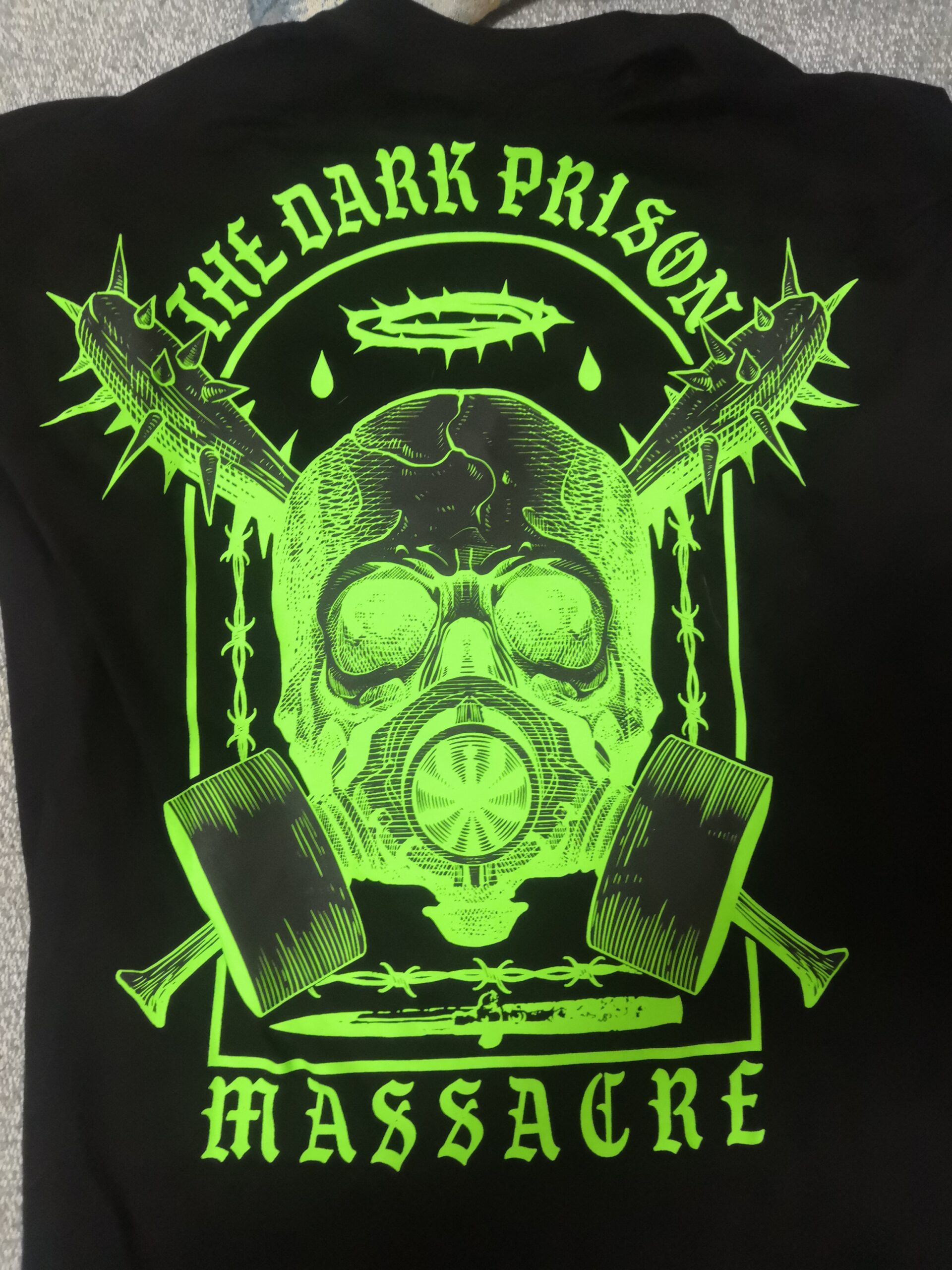 The saviors of slam. The wardens of the dark prison. The titans of Tianjin. The Dark Prison Massacre, throughout their 15-plus years of existence, have elevated themselves to the level of a top-tier band of almost legendary status. Throughout the years, they have been a part of various multi-band showcases around the country, including their home base of Tianjin. On this night, though, TDPM would play an intimate show in their hometown in order to celebrate the years of comradeship the band has with their supportive fan base. The band offered free gifts for early ticket purchasers, which included t-shirts, slippers or a towel. My feet are massive, so I opted for the way-too camouflaged t-shirt.

Before the show, the band took photos with the fans and sold a butt-load of new merch besides those freebies, which included a white shirt with hot pink logo. That stunning pink would be the one used on the screen for the band tonight – when you see TPDM, each show has a different feel and look this way – the logo may be green, blue, pink or even in English.

TDPM hand-picked Iron Throne to have the honor of opening the show. It was a fitting choice – the band has been on a roll as of late, taking names and getting heavier with each performance, while also writing new material to be showcased at each consecutive show. Here, they blasted through familiar numbers while introducing new material. It was enough to get the crowd satiated for the main course.

The 20 Years Livehouse was packed to the brim, and without proper air conditioning, things were about to get really sweaty, really quickly. The curtains pulled back and the five-man wrecking crew commenced doing what they do best – slamming the shit out of everything as the crowd immediately came undone.

Comparisons have been made to Pantera as per riffs and guitarist He Ji was certainly channeling the spirit of Dimebag on this night – wearing a pot headband, his stomps were something out of “Domination”. During some particularly savage parts like on the favorite “Moral Heritage”, the band was nearly jumping out of their skin.

In comparison to sets on festival shows, TDPM at this gig brought out all the fixings, playing for at least 60 minutes and reaching across their catalogue – from My Cock is the Truth to the recent Egyptian themed Conviction. Commands were given – the wall of death, sitting down and then jumping up all at once, circle pit – and by halfway through the set, the rabid headbangers were flinging sweat from their heads like they were dogs trying to dry off after jumping into a swimming pool.

At the conclusion of the show, there were many smiles and a celebratory atmosphere. Tianjin loves TDPM, and they will soon take their show on the road again. The question is, just when will the rest of the world experience the slam spectacle for themselves?