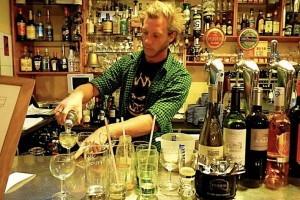 Hi Clement, how long have you been in China and what pushed you to come here ?

Adieu toi Jean-Seb’! I’ve been in Beijing for over 7 years now, I first came here for my studies in 2003 in Qingdao. I started learning Chinese in High School then pursued into Chinese language and history at the university. My goal was actually to come to China since I was 18yo.

How did you get the idea to start Temple ? what is the purpous of it ? What can you tell us about Temple ?

Well, having been in Beijing for a while, I used to organize concerts in many different venues just for fun as a College student with two old friends: Gildas and Nicolas (NewBang). We were trying to promote Chinese local bands and to make foreigners realize that there’s an awesome Rock scene in the ‘jing!

Here you got great bands, great venues and great bars. But only a few good places offer you decent Rock shows with quality sound and good booze. Gaoxu & I always wanted to open our own bar with Rock’n’Roll tunes blasting all night long. It was like a kid’s dream! With the Temple, we just did what we were all in need for: free concerts with great local and foreign bands, good drinks with the real stuff and a place where you can do whatever you want as long as you respect each other. It is the exact spot between the Bar and the Live House.

Why did you choose to open Temple in the Gulou (Bell tower, center of Beijing) area ?

The best location ever of course! MAO, YuGong, now XP + all these music, video games & skateboard stores all around! It wasn’t easy to find the right place with the right size, and it costs a lot! But Gulou area is the new Rock’n’Roll core of Beijing for sure!

You used to be the manager for AK-47, a pretty famous underground Chinese band, what was it like on the road ? What are the experiences you will never forget ? Are you still managing bands in Beijing ?

Oh man, it was awesome! I know LaoMao (singer) since 2006, when we organized our first metal concert at Nameless Higland (RIP) with NewBang. In 2009 they were in need of a drummer, that’s how my good friend Cedric started to play with them. I just helped them get back together for the launch of their new album: 无法停下

The tour was so great; we went to so many places, met so many cool people, drunk so much stuff… I will always remember all the locals trying to get Cedric and I fucked up with their local alcohol, they lost so bad ahaha! But you know, climbing the Old Mountain in Shandong Province, visiting the War Museum in Nanjing or going into some deep caves in Yunnan Province with a bunch of locals between two gigs, that is the best experience ever, especially when you are with your “super best friends” here in China.

I never pretended to manage any bands, I just help ‘em how I can. Get some gigs, interviews, live & video recording. All that can make them and their music stronger and better. We all worship good music, that is my way to help Chinese Rock.

You come from a pretty island in France, l’ïle de Ré, is there any music scene there ? What can you tell us about it ?

Well I am from a little island of 750 people in the Atlantic Ocean, so let’s say that yeah, there are not that many musicians there… Although there is one band called “Delirium Tremens” (yeah like the beer) which plays Psychobilly. Few covers of the Stray Cats, Johnny Cash or the Happy Drivers, hell is on earth! We know each other since we are kids, and they’ll come for sure very soon here, they are gonna blow your mind!

I heard the the 1st year anniversary of Temple is going to happen on the 21st of July, what will happen that day ?

Oh man, the 21st gonna be a hell of a show! First we will do some happy hours drinking on that night. And then for your own pleasure ladies and gentlemen, here they are, some of our favorite musicians: Skarving / Rolling Bowling / The Amazing Insurance Salesmen + DJ Green Monkey… We just want to thank everyone for their support, it’s been an amazing year for the Temple and it wouldn’t be that amazing without the crowd and the musicians who make it lives. That’s our way to show people gratitude and respect, by the power of Rock’n’Roll!!!

I play a lot in your bar, as Djang San, or with “The Amazing Insurance Salesmen” and I think almost all musicians in the Beijing music scene have played in your bar this year, who hasn’t played that you would like to come play ?

That’s why I love our bar so much, people love playing here, and as a music fan, we love to see a band having a hell of fun on stage!

Miserable Faith, XTX,SUBS, Brain Failure… Just to name a few! I know these guys are hard to book but we’re all good friends so hell yeah, we’ll do it!

What are your plans for the future as a bar and band manager ?

Dunno yet for the future of the bar, we’ll see how it goes, with the flow. And a bar like the Temple can only go bigger and better! One thing for sure, I’ll keep on helping my friend’s bands as long as they play good haha! And I will be putting more and more concerts. My dream: a huge outdoor festival, great local and foreign bands and a huuuuge iron bar full of shots and cold beer… at least there’ll always be beer and Rock’n’Roll in our world!