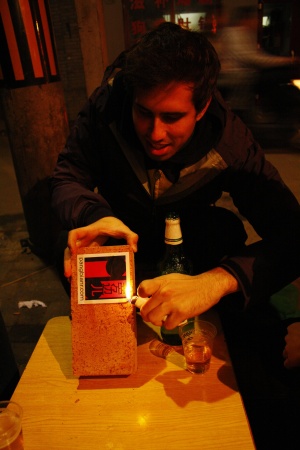 How long have you been in China and what pushed you to come here?

I’ve been in China for just over three years now. Originally, I came because the first job I found after graduating university was at an internet startup in Beijing. Previously, I had spent a semester in Yunnan province studying archaeology and anthropology, and for some reason felt compelled to come back to China despite no formal training in Mandarin. After a year of working in Beijing, I became interested in the music scene and decided to quit my job and focus on music.

I started at D-22 as a booking assistant in November 2010. Eventually, I was doing almost all of the booking, and kept that position until D-22 closed in January 2012. At XP, I am the general manager, so I oversee all booking/event programming, the bar, the cafe, the record store, etc.

Why did D22 close and why did it re-open as XP?

D-22 reached a natural end. The bands that started out there have by now gone on to a fair amount of success and recognition. By the end, the most interesting shows at D-22 were the weekly Tuesday night experimental shows, called Zoomin’ Night. So we wanted to open a new space focusing specifically on this aesthetic and this scene.

Why did you choose to open XP in the Gulou area?

Many musicians active in the experimental scene (not to mention other artists and audience) live in the Gulou area. D-22 was focused on promoting university bands, so it was located in the university district. XP’s location reflects a different community and goal.

What is the difference between D22 and XP?

D-22 had more of a rock’n’roll and punk focus, XP is focused more on avant-garde, experimental, noise, free improvisation, and other more difficult forms of music.

When will you do an opening party for XP?

We won’t. We had an informal opening show on May 1st and we opened properly on May 8th. We’ve had regular events since then.

You also have been managing your own website « Pangbianr », what is the purpose of the website and what is its connection to XP?

Pangbianr’s purpose is to produce, distribute, and promote underground and avant-guard Chinese music and to build relationships between musicians, filmmakers, and visual artists both within China and internationally. It does this through online media (streaming audio, video, reviews, interviews, critical analyses), event booking/promotion, and distribution of physical goods. There’s no explicit connection between XP and pangbianr, but since I seek to book shows of interesting experimental music via pangbianr and I manage a venue focusing on this same type of music, of course there is much overlap. Also XP has a record store which makes it easier for pangbianr to sell items from our physical distribution.

I think the Chinese music scene is developing in so many directions at once that it’s hard to make any predictions about how it will evolve. Anyway I have a relatively small view of it, as I give most of my time and attention to a small sliver of underground activity that has virtually no commercial appeal. At least within my niche, I think there will be more international exchange as more underground foreign bands come to China on DIY tours and create more network connections between underground labels/music collectives in China and abroad. This, I hope, will encourage the continued growth of a fledgling DIY movement that’s just now taking root among younger Beijing bands.

I heard you have a band, what can you tell us about it?

My band is called Chui Wan. We play psychedelic noise rock. We’re working on finishing our debut album, which should be out on Maybe Mars this Autumn.

Man, I am going to keep doing exactly what I’m doing now and have been doing for the past 2 years. Booking shows, promoting bands, trying to find new formats for events or releases, playing drums, etc…