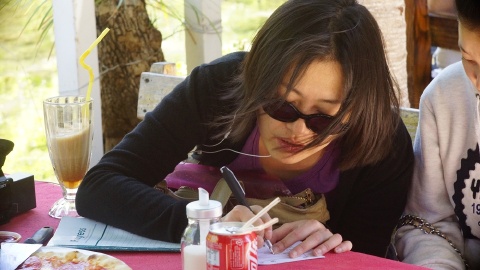 Located at the border with Vietnam, Yunnan is a very important place for culture in China, and it is home to many minorities that have their own culture and language. More and more music festivals take place in Yunnan each year, and the COART is one of those festivals. I have played the COART festival last year in Shuhe, it was a great experience and I used the images I shot there in one of my latest video “Morning Hangover”. I really liked the experience of playing there last year so I decided to interview Christine, who is the head of the COART Music Festival.

You are the organizer of the COART festival that takes place this year in April in Shuhe, in Yunnan province. When did you start the festival and why?

The first COART was in April 2012. Why? It’s something fun and it really suits the village of Shuhe, doesn’t it?

The COART festival invites mostly folk musicians to perform. There are lots of minorities in Yunnan, and each minority is known for having a strong musical culture. Are the minorities participating in this year’s festival? What is your point of view on the music of the minorities? What can you tell us about it?

Inviting only folk artists is not our intention. For the last two COART, we have gotten experimental artists like Song Yuzhe, Liang Yiyuan, Li Daiguo, Djang San, Laurent Jeanneau and many more. There were also Jazz and Blues artists. We actually don’t have any preference of any kind. All we care about is if the artist is willing to try something new with others or have some great ideas to deliver.

Yes, there is a session in COART called “Naxi Yu Shijie” (The Naxi minority and the World). We are not only presenting the authentic Naxi culture and art during COART, we are also inviting artists, musicians, modern dancers… to work with them. This year it’s going to be “Dongba Zhi” (The Dongba minority papers) – a type of paper the Dongba minority has used for over a thousand years. There will be “Dongba Zhi” making workshop, and modern artists of different background are invited to work with the material. Music is an important part of COART, but other than music, we’ve also got theater, film, visual art, poetry, exhibition… All the others are equally important as music.

Shan Ren is going to play at COART this spring as well. My point of view on music of the minorities? Love it! Not particular one, but to listen to different varieties.

There used to be another festival in Yunnan, the Snow Mountain Festival. I remember the first one had been organized by Cui Jian, the godfather of Chinese Rock n’Roll a few years ago, and that it had been sort of a revolution. Is there a connection between the COART festival and the Snow Mountain festival? Are there any other festivals in Yunnan that you help organize?

I was involved with the Snow Mountain Festival from the very beginning. Cui Jian and I are good friends. There isn’t much connection between the two festivals now.

There seems to be more and more music festivals in China, why?

Why not? There are also more Disneylands.

A long way to go.

What are the most interesting bands you have seen at the festivals?

I haven’t been to many Chinese music festivals. I have seen some interesting performances in Dali for the past few years.

Haha, I have only done things that I am interested in. So can I say that I’d like to go with the flow?