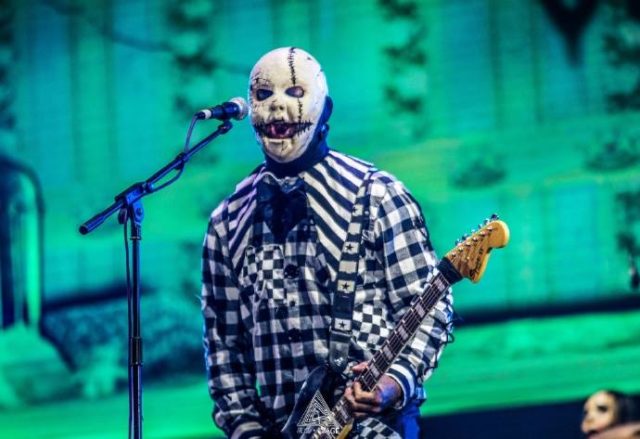 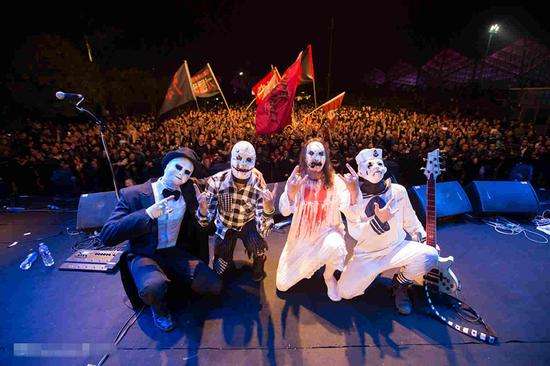 Hi Scare the Children, can you introduce yourselves  ?

We are a 4-piece metal band from Beijing, China, formed in 2014. Our performances lean towards the theatrical, with costumes and stage decor borrowing from horror themes. We try as best as we can to set a certain mood not only through the music, but also through visuals and ambiance.

All of your concerts have you dressed as monsters, what is the meaning of each monster if there is one  ?

The costumes are actually supposed to be of haunted dolls. We each chose the individual concepts, but they all drew inspiration from either urban legends or horror films. 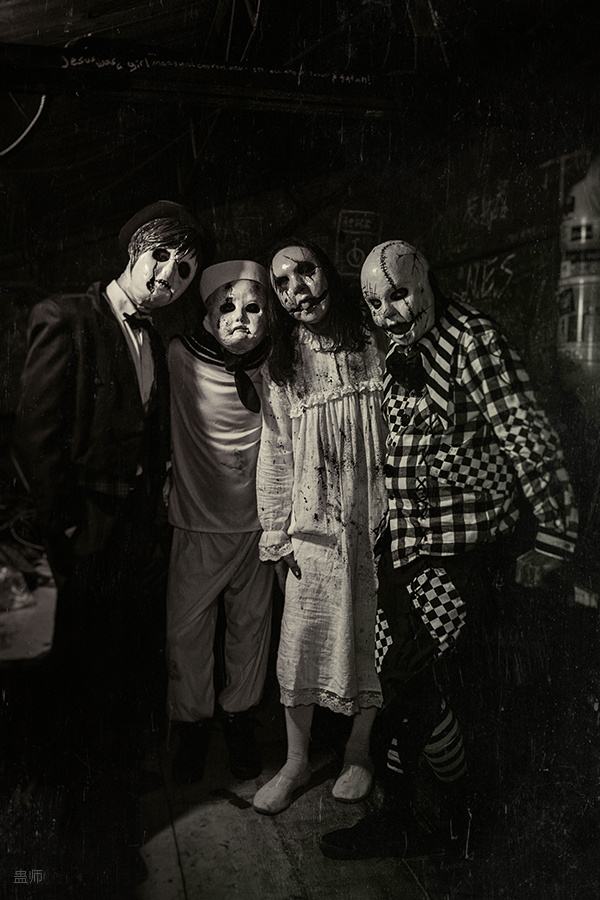 Why did you want to start such a band dressed as monsters  ?

The idea of dressing up came very naturally once we agreed on what the themes of the songs would be. It was decided early on that the song lyrics would revolve around horror stories, and we figured haunted dolls could be an interesting concept for the first album. However, the idea of four grown men singing about dolls and trying to be scary seemed a little silly, but if we went all the way and really pushed the concept on multiple levels, it could work. Hence the costumes and decor.

You recently went to Japan and toured also with ögenix, another metal band from Beijing, how did it feel to play there  ? How was the audience  ? 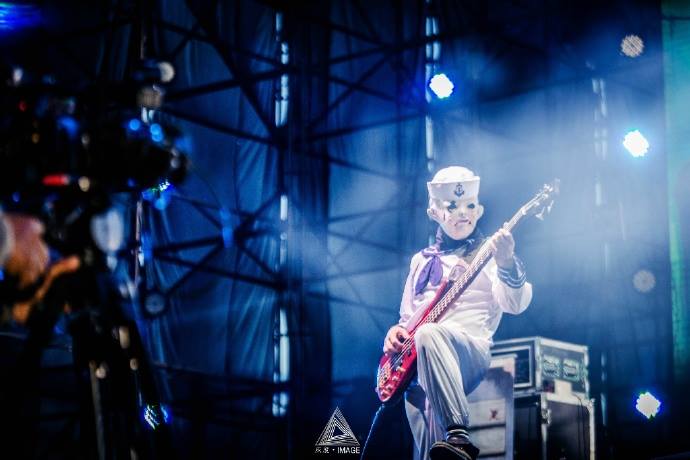 Japan and China are two opposites in many ways. In regard to gigs, well, Japan runs at 150% efficiency at all times. For example, soundchecks are quickly done and the sound is always perfection, every show also starts on time and ends on time. In China things are usually a little messier and less organized. However, being less organized is not always a bad thing, especially when it comes to crowds. In Japan people are very respectful and seem to enjoy the show in a more reserved way, while here crowds tend to be more animated and wild, which helps us gauge our performance and react accordingly during the show.

Another thing we noticed very quickly over there was that we would have our work cut-out for us, since Japanese bands are just as professional as the sound engineers – they take their craft very seriously and everything they do, from their sound to their visuals, is always on point…these guys don’t mess around and the level of talent is through the roof.

All that being said, the tour was great and people responded very positively to what we were doing. We also made some good friends, with whom we hope to, perhaps, co-operate on future projects down the road. 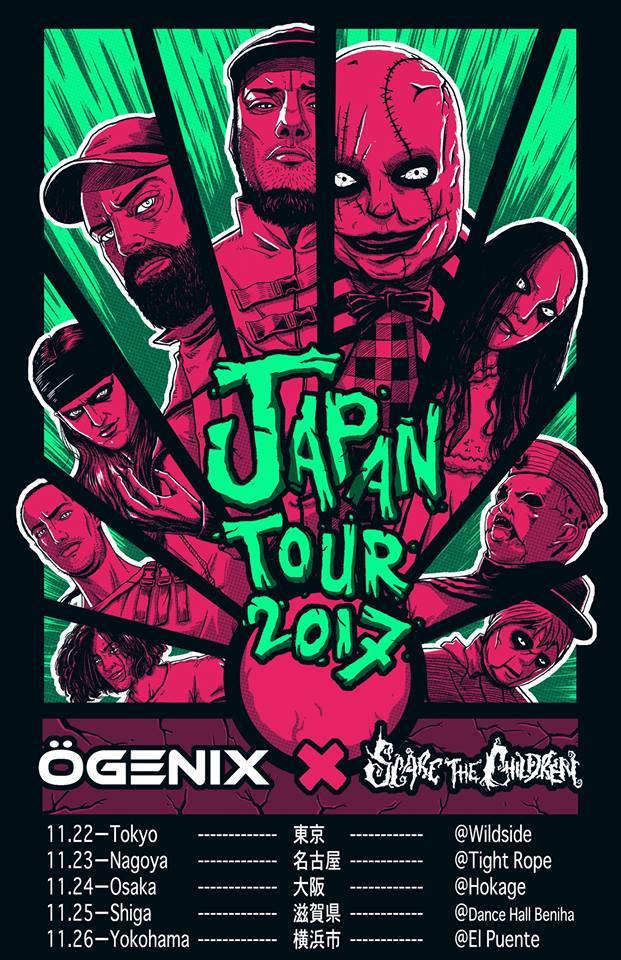 I heard you have released a demo album this year, where can we listen to it/buy it  ?
Will you release an album in 2018, what are your plans regarding the new release  ?

We have some of our demo songs online, which you can listen to for free. You can check it out at: http://music.163.com/#/artist?id=12386628. We also have a CD out, which we unofficially released in order to have it ready before our Japan tour. But we are currently tweaking a bit on some of the songs as well as the art work for a proper release, which should happen pretty soon. The CD that is currently available is not for wide-distribution, but if you come to the shows, we’ll probably have a few copies there.

What are your thoughts about the Chinese metal bands and do you think there is a place for more foreign metal bands in China  ? 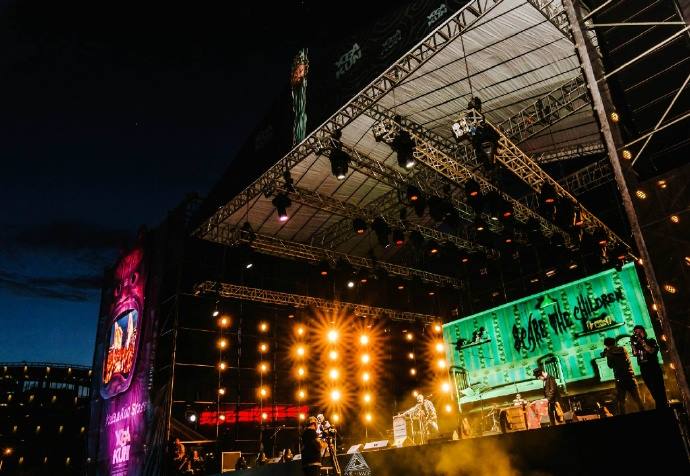 As with all music genres in China (and elsewhere, for that matter), you have to dig a bit before you find that one band that really stands out, but they are certainly there. There’s a lot of talent and creativity in the scene, and more and more bands are starting to think outside the box, blending different styles to try to come up with something new.

As for foreign metal bands, it’s hard to tell. Being a foreigner in a band in China can open some doors, but also close others. Some promoters may want to book you just because your band has foreign members, but when it comes down to true recognition, the local scene tends to prioritize local musicians, which is understandable and even commendable, but can be frustrating for some of us who’ve worked just as hard as our local counterparts. Anyway, making music (especially in the field of Rock) was never supposed to be easy. What it boils down to, is that if you work hard and do your homework there is room to make your own action happen, regardless of where you come from. 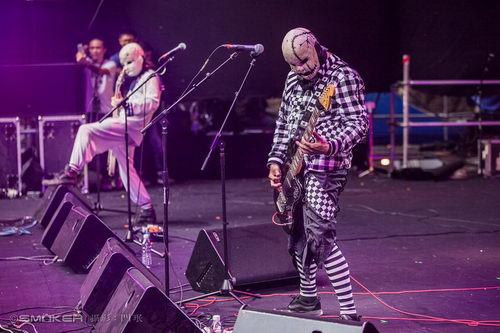 That’s a pretty impossible question to answer. In all honesty, it would be easier to talk about a “worst” show, since there are so few gigs that we would qualify as bad. On the other hand, a show can be great for so many different reasons, and there’s always something awesome to draw from each and everyone of them. We’ve enjoyed playing big festival stages in front of thousands – there’s something incredibly thrilling about having a huge amount of people go completely mental and respond in unison to every move you make on stage. But we also love playing smaller venues where we are face-to-face with the crowd. The intensity of the close interaction with the audience on smaller stages can make a show so much fun and wild. Other factors that affect how we feel about shows include whether or not there were technical difficulties, if we managed to play through the whole gig without anyone fucking up once (which probably has yet to happen…), and even just the overall vibe between all people involved. 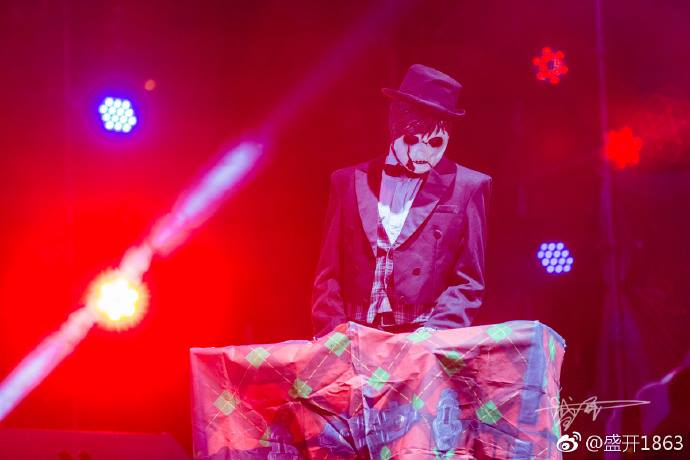 Basically, there are so many separate factors that can make a show great, that is really hard to pick ONE best show. I’m not sure there’s ever been a gig we played where everything was flawless, but that’s what makes this whole thing so exciting, that’s what makes every show different and unique. Rock ‘n’ Roll has always been about the danger in not knowing what you’re gonna get each night.

Having said all that, we can probably tell you about some of our favorite venues and festivals we’ve played. Temple Livehouse in Beijing has always been home for us and every show we’ve played there was excellent. It’s counterpart in Shanghai, the Inferno, is another great venue (which unfortunately is closing its stage now and seems will no longer be a live music venue). As for festivals, we’ve played Midi several times and those were amazing – awesome organization, great team, huge crowds; and we’ve also just done playing our second Rootfest, which is run by Modern Sky and has some of China’s biggest names in metal as its line-up, and that’s always a big honor for us. Also worth mentioning is Vigor, as a stellar promoter of straight-up killer Rock shows throughout Beijing. We’ve definitely had some unforgettable gigs organized by these guys. 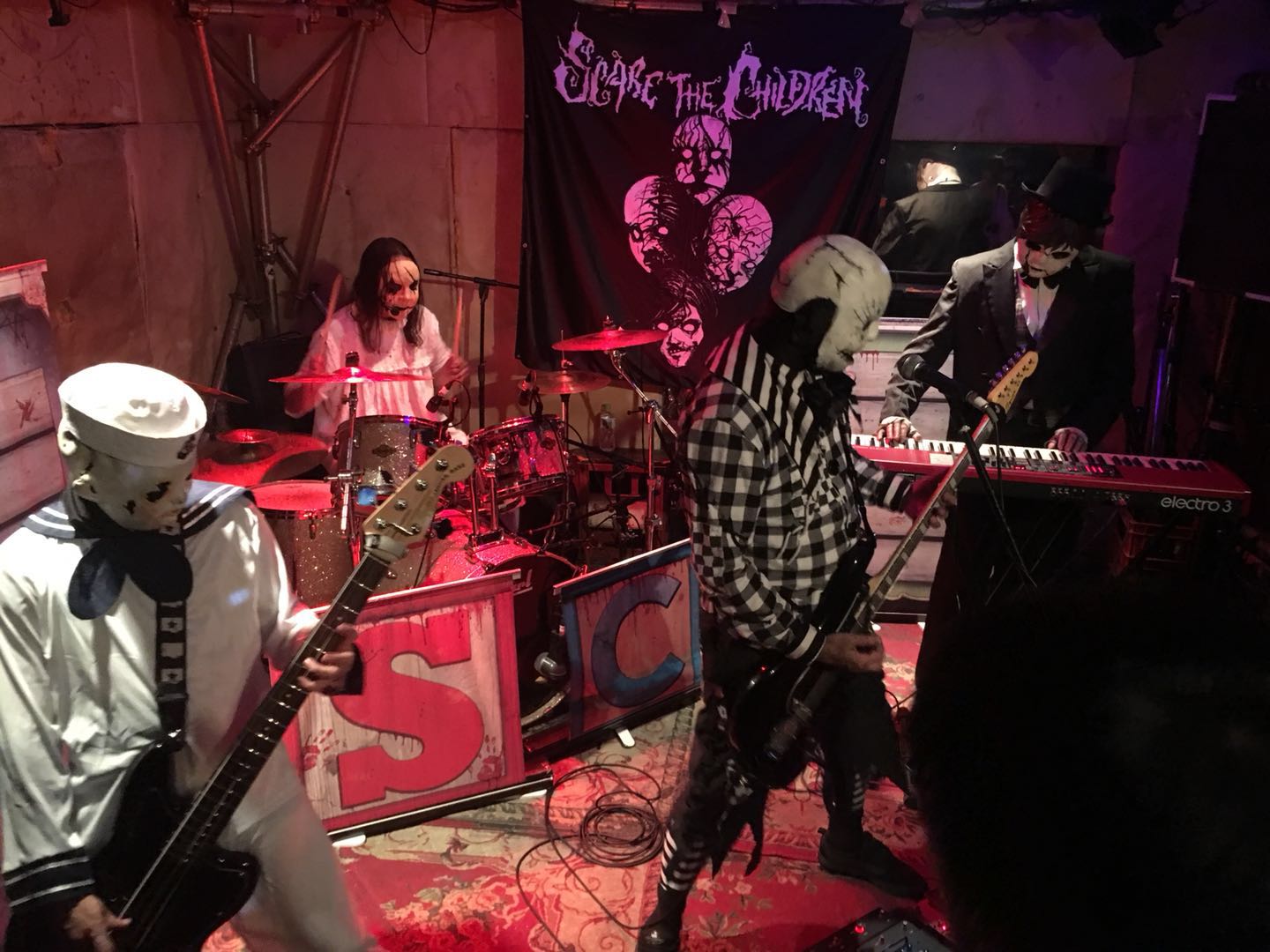 Is there any music you want to share  ? (not necessarily yours).

Sure. We got some local bands we all really enjoy, not only in the metal scene.

Los Crasher is an old school Hard Rock band from Beijing that we like a lot. They’ve just come back from a 3-month tour of China, and they are as tight as ever. They finished this tour by playing a gig in Beijing at Yugongyishan for over 2 hours. In fact, Antoine (our keyboard player) was an invited guest on stage that night. Was great.

We also go way back with Never Before, which is a Stoner Metal band who’s been around for a while and got a real gritty, bad-ass sound with some awesome grooves and hell of catchy riffs.

Gotta mention Silent Elegy as well, a Metal band we’ve played a few gigs with, who has the most incredible female singer with an Opera soprano type of voice, pretty damn impressive.

More recently we’ve really been into Alpaca, a stoner band from Shanghai. Amazing musicians all, and their singer’s got a voice that is both melodic and rough as a rusty nail, real unique and fucking beautiful.

We’ve also been digging Struggle Session (Hard Core) who has, arguably, the most intense, no holds-barred show in town. Watching these guys play is always fascinating and an incredibly interactive experience, to say the least.

Of course, we must mention Ogenix too, which is an Industrial Metal quintet that have close affiliations with our own band, since some of our guys also play in that band. But, regardless of that, we can still say with honesty that they put on a 100% energy-fueled show definitely worth checking out. Gabriel, the singer, does a great job as a frontman, always engaging the crowd like a master. 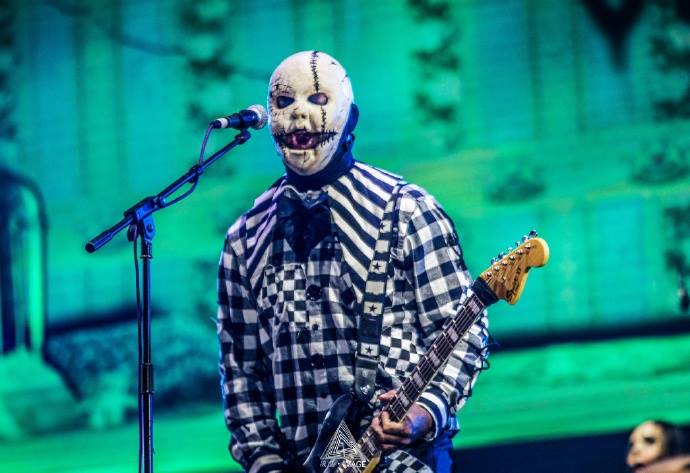 And then there are the more obvious ones, those bands that have been in the scene forever, but are still on top of their game, such as Yaksa (metal), WHAI (alternative/experimental rock), Nine Treasures (Metal) and so on. They are real pros and always put on one helluva show wherever they play.

Come check out Scare the Children and Ogenix play Temple this 19th of January. It’s going to be our first show since we came back from our Japan tour and should be an amazing show ! 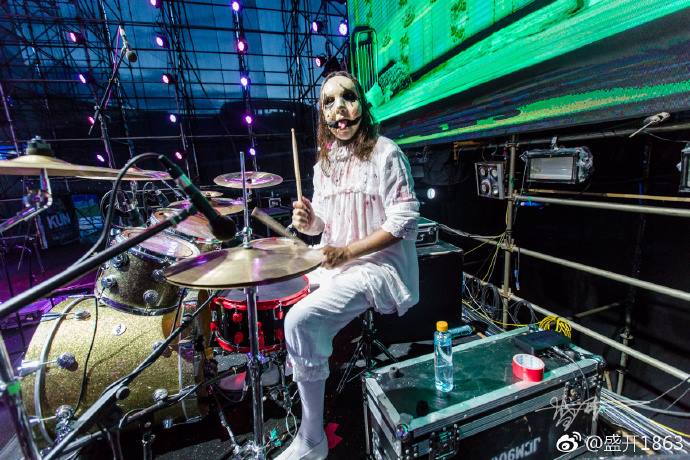