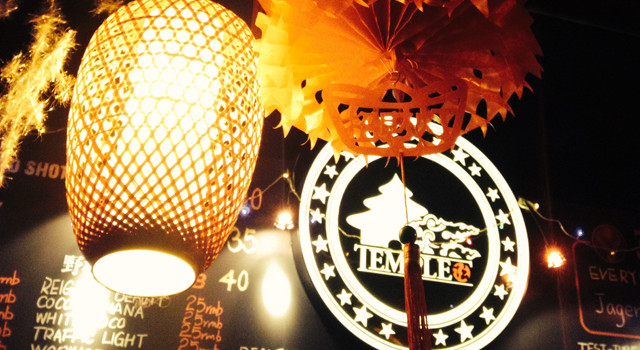 Temple has closed, this is sad news.

One of the main pillars of the Beijing Underground is now gone….Temple is the kind of places which such cultural importance it shouldn’t have been allowed to close.  But hey, the general tendency in the world and the virus didn’t help…

So what can I say about Temple ?

Clearly it was one of my favorite bar and venue in Beijing, and as one of the musicians/artist who has played the most there (in average once a month/every two months since its opening in 2011), I have to say knowing Temple has closed is also knowing a part of my life is now in the past.

We all hope Temple will find a new location for the sake of the Chinese underground music and the sake of rock music in general.

So where do I start ?

I think it was 2010 when Clément Berger, who was still the manager at Salud in Nanluoguxiang told me he was thinking of opening a bar with Gao Xu (of AK 47 and Long Shen Dao). Then at some point I remember him telling me they wanted to call the bar « Temple » and I think I said something like « well it’s not great but why not » or something haha.

At the time Pink was working at Salud and she was also interested by the idea.

A bit before Chinese New Year 2011 Clément told me to come over to check the advancement of the construction work there. I remember Cédric of Scare the Children and other people were there too, that night we watched the fireworks from the rooftop  At the time fireworks were still authorized in Beijing for the Chinese New Year, it felt like being in a war, a harmless loud war.

The only thing I remember being in that courtyard was the Internet café which was later replaced by the bar E&A, you could see kids there playing Counter Strike to death.

Clément and Gaoxu originally thought of having a rooftop area for the bar but regulations prevented it and it never happened. Still, for many years, that staircase opening in the bar’s ceiling gave us a signal, when the sun was rising up, the early morning sunlighit would slowly enter the bar, and it was time to go home.

2011 was not a bad year for the underground music scene in Beijing, we still had D22, 2Kolegas, Mao Livehouse was still in Gulou Dong Dajie, Hotcat, Jianghu, Jiangjinjiu, Salud, Yugong Yishan, Zajia Lab, Modernista, Haze, What bar, the stone boat……..the list goes on….so many places to play and go see shows, it was amazing….I would often go from Salud to Mao then to Temple, Modernista, etc…it was easy and in one night I could see maybe 5, 6  different bands or more, it was a great way to see all kinds of music and get inspired by it. A year later in 2012 Dada opened, D22 closed, and XP opened.

Little by little with many venues closing Temple became the center, and all musicians from all styles and backgrounds would go there have a drink, discuss of musical projects for hours and hours until often 5 or 6 in the morning before eating Jiaozi at the street corner and then go home to sleep. I can’t remember how many people I met there, how many conversations, about everything and about nothing, about music, life, anything…..and then Nathan would come and say “Time is irrelevant, how do you know what is real !” hahahah…..

I spent many nights at Temple, talking, drinking, escaping, but also making a lot of music, it was always one of the best places to play because with no ticket entrance, you would be sure to encounter the whole city, and it would be packed, and people would be dancing and go crazy to the music.

Temple was also a very important part of the Beijing Underground Music Days festival, we had good shows there too.

But the most important was probably that when you didn’t know where to go from Tuesday to Sunday, you could always go to Temple, even in the middle of the night, and there would always be something interesting happening, a good show, a bad show, someone to have a crazy or drunken conversation with, people going wild and more…Also any musician playing somewhere in the city, a gig, a show in another venue, a five star hotel, you name it, would very often come to Temple after the show, because everybody knew it was the place to meet other musicians.

I’m happy I did one of the last shows there back in November.

Where will we go now ?

Special thanks to Clément, Gaoxu, Pink, Morgan, Marshall, Ian, all the sound engineers all the DJs for entertainaning us so many years and making that place what it was.

Temple, RIP, it was a pleasure to have been part of your story. We all hope you open again somewhere soon…fingers crossed.