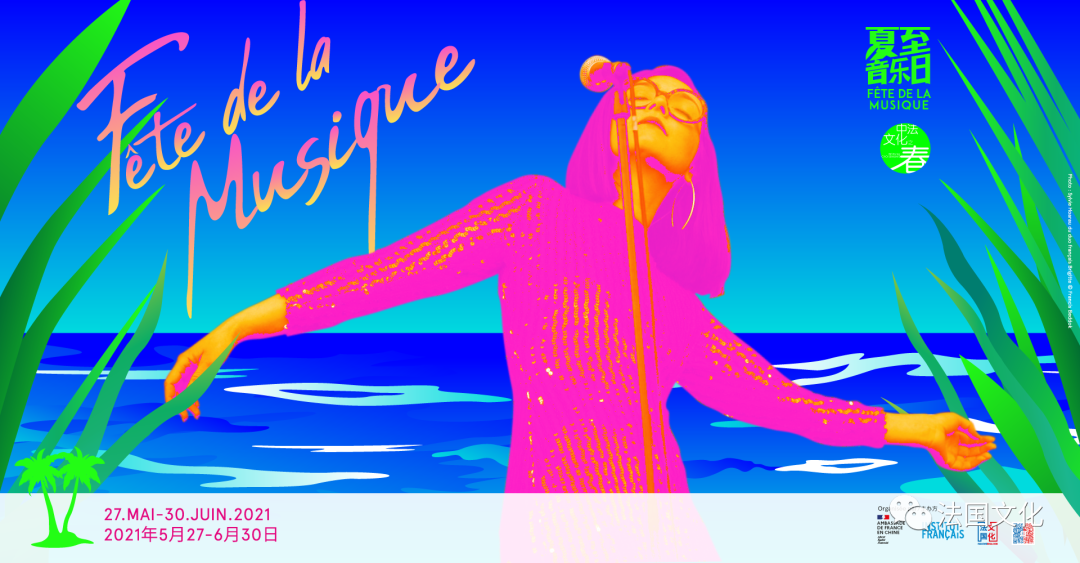 “The Fête de la musique, also known in English as Music Day, Make Music Day or World Music Day, is an annual music celebration that takes place on 21 June. On Music Day the citizens of a city or country are allowed and urged to play music outside in their neighborhoods or in public spaces and parks. Free concerts are also organized, where musicians play for fun and not for payment.

The first all-day musical celebration on the day of the summer solstice was originated by Jack Lang, Minister of Culture of France, as well as by Maurice Fleuret; it was celebrated in Paris in 1982. Music Day later became celebrated in 120 countries around the world.”

The Fête de la Musique is back in China for a 14th edition after a blank year due to the health situation. This popular festival takes place from May 27 to June 30 across China and offers a program as rich and varied as in 2019. This festival is an opportunity to bring together emerging talents from both countries and to make them known to the greatest number. More than 150 free concerts will be offered in 10 cities: Beijing, Shanghai, Canton, Chengdu, Shenyang, Kunming, Wuhan, Shunde, Lijiang and Changsha.

June 21 is the day of the summer solstice, the longest day of the year in the northern hemisphere and marks the start of summer. It is also a day of celebration, the Fête de la Musique!

Fête de la Musique is part of the Croisements Festival

The Fête de la Musique mini-program, ergonomic and easy to use, will allow the public to consult all the programming, by city, by date and by group in music and images, to discover the artists and to share their opinions and photos. .

It will also be a registration platform for each concert. The mini-program will accompany music lovers throughout the year and will highlight new trends, young talents, favorites, concerts with always as a leitmotif, the discovery of new musical universes.

A digital component will strengthen the device of live concerts, the opportunity for participants to discover French artists like George Ka or James Baker through the White Board concept dedicated to rap: a single recording in the studio without editing and without artifice will allow the public to discover the a cappella pieces. The interactive games Just Dance and Monolith, which will come in interlude, will bring a playful touch, online and on the big screen, in the various partner concert halls.

Re-inventor of Chinese classical instruments zhongruan, guzheng and pipa, composer,
guitar player, one man orchestra, drummer, bass player, music pioneer and explorer of
new sounds, Djang San (Jean-Sébastien Héry) has been doing music in Asia since the
year 2000. An artist with many faces, Djang San has also won the battle of the bands in
Beijing and Hong Kong against 100 bands in the year 2011 with The Amazing Insurance Salesmen.

Pierre Pradat is one of the most requested musicians established in China. He has played thousands of shows all over the country at the greatest venues for more than a decade after relocating from France, including many for some of the top Chinese pop stars and movie directors. He is a highly versatile and creative artist, cultivating a mainstream jazz piano style balancing elegant lyrism and virtuosic energy with a great sense of swing. He is also specialized in playing Rhodes electric piano and analog synthesizers, and is very open-minded on other genre like Funk and Electronica. His main influences to name a few are Kenny Barron, Bill Evans, Herbie Hancock, Chick Corea and Keith Jarrett.

He is also a very respected jazz educator, having taught to hundreds of Chinese students so far.

Boris Background has been the resident DJ at the most upscale hotels, restaurants and cocktail bars in Paris. He is also favored by French haute couture and fragrance designers in luxury events.

Oshi is a reference and favourite for international acts, a French-born DJ/producer who has been based in China for most of the past decade.

Awarded the best Beijing DJ 2015, Oshi has been raised to the rank of underground superstar in China and he is behind the successful Bass night that can boast the bounciest dance floor of the capital: The Drop.

In 2013 and 2014, The Drop was in charge of The Electronic Stage at the Redbull in Music festival, for Day 1 of the Strawberry festival in Beijing, Shanghai and Chengdu

With his ability to push through the barriers of style and genre, Oshi “the Selector”, will take you on an aural bass-driven journey from future beats through UK house, grime, footwork, juke, drum’n’bass, trap/twerk, tropical house, techno, moombahton and more.

4-piece-indie-rock band based on wuhan, China.

ETA is a young funk band from Changsha. They have integrated funk, disco, R&B, etc. in their music styles, and flowed the rhythm of this fusion feeling into their bodies. At the same time, they have always maintained a keen love for the retro soul music and the latest synthesizer element of new school, ETA will stimulate your ears with the most authentic groove and urban music.

Ma Bang shows their spacial charm and energy of the Original music in their music by playing music from various music Chinese Minorities, such as Zhuang, Dong, Yao.